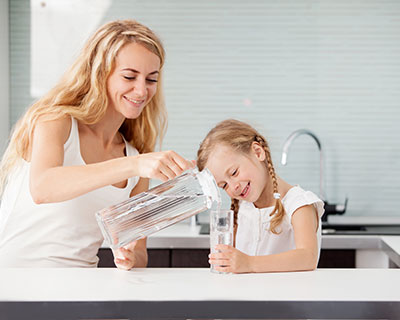 The only solution to a hard water problem is to remove all of the calcium and magnesium. The most efficient and healthiest way to do this is by installing a water softener. A water softener is plumbed into your home or offices water supply system, typically at the point where the water enters your home or office. Through a process called ion exchange, a softener will trade the “hard” particles for “soft” particles.

The stronger charges of the calcium and magnesium ions replace the lesser charged sodium ions. The freed sodium ions are then released or “traded” to the water.

Water softener maintenance consists mainly of replenishing the brine solution with salt. The amount of salt needed will depend solely on the hardness of the water and water usage per month. The brine storage should be cleaned on occasion. The float assembly and brine valve should be checked on occasion and clean if necessary. Reconditioning of the ion exchange tank may be done periodically; the amount and/or type of impurities present in the water will determine the frequency of reconditioning. Like any other mechanical appliance, over time plastic parts and rubber gaskets will need replacing.


Call any one of our convenient service areas for assistance